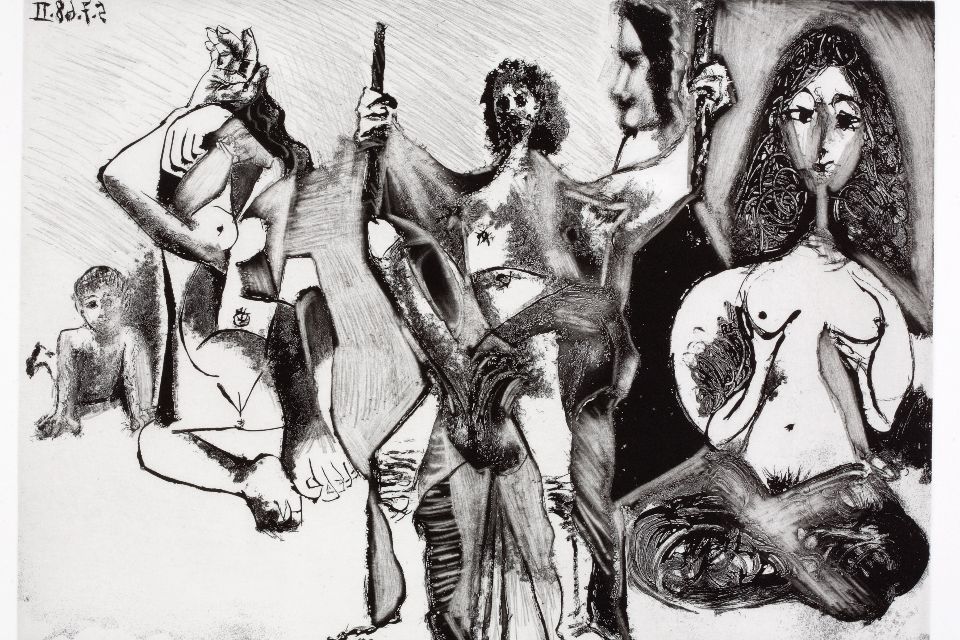 Approximately forty works by three major twentieth century artists: Georges Braque, Marc Chagall and Pablo Picasso. Artists linked not only by their ranking among the very finest of artists of the last century, but also by a profound interest in graphic techniques, from burin engraving to etching with aqua fortis (nitric acid), from aquatint to lithography. Far from being considered a poor relation compared with their more well-known painting activities, the graphic production by these three artists is incredibly vast and wide-ranging, from both the iconographic and technical point of view, and it developed over their whole careers. Marc Chagall is represented by plates taken from Ma vie (My life), the autobiography written in the early 1920s and illustrated at the request of the editor Paul Cassirer, alongside three great cycles of etchings inspired by Nikolai Gogol’s Dead Souls, La Fontaines’s Fables and by the Bible. These were executed in Paris between 1923 and 1939 for Ambroise Vollard, editor and art dealer of reference for all the great early twentieth century artists, including Picasso. Approximately fifteen of these works were hand water-coloured by the artist, and attest to his brilliance as master of colour. A panoramic picture of Pablo Picasso’s engraving work emerges in the Suite Vollard, produced in the 1930s for the renowned publisher Vollard; it is made up of 100 engravings and focuses on subjects dear to the artist, such as his depictions of the Minotaur and the sculptor’s atelier. Alongside the Suite Vollard prints there are other etchings dating from the 1950s, which Picasso produced in his delightful retreat in the village of Mougins on the Côte d’Azur, inspired by theme of eroticism. Finally we have Georges Braques, who worked in extremely close contact with Picasso in the early years of the 1910s, giving birth to Cubism. The exhibition presents a set of lithographs and aqua fortis etchings which are of enormous visual impact deriving from the prodigious use of colour, produced in the 1950s and 1960s. They illustrate the poems of eminent authors of the era, including Pierre Reverdy and René Char, and were printed in Paris for the publishers Mourlot and Maeght.