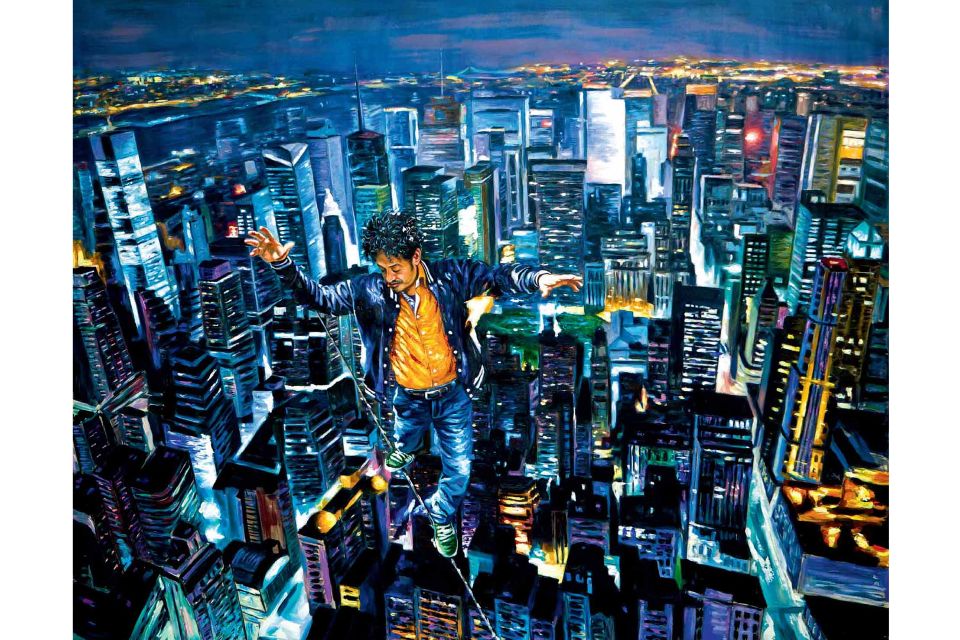 Studio Guastalla presents  CROSSOVER  , around twenty recent works by Ali Hassoun, vibrantly colourful paintings and watercolours in which the Italo-Lebanese artist explores in depth the themes that have engrossed him for twenty years – nomadism, cultural contamination, multiple identities and the simultaneous co-existence of different worlds in one reality. Hassoun was born in Sidon and ended up in Milan twenty years ago after his studies and a long stay in Tuscany, split between Florence and Siena. The various identities that coalesce in him and his fascination with Africa, where some members of his family live, are refracted and recomposed in his works, as in a game of mirrors and allusions. Hassoun is constantly crossing a frontier in his pictures: his African women, his families in flight, his tightrope walkers standing out against a background of paintings that range from Andy Warhol to Capogrossi, from Picasso to Michelangelo. Hassoun’s identity is moulded in a continuous shifting of time and place, of characters who are reflected, observing and acting, in a world that is not their own, leaping over temporal boundaries, blending and stratifying visual and cultural references.
As Martina Corgnati noted, in her critique accompanying the catalogue of the 2010 exhibition in the Palazzo Pubblico in Siena, “Ali Hassoun alla confluenza dei due mari (At the confluence of two seas”), it was by crossing the border between east and west, finding himself like a fish out of water, that Ali Hassoun was forced to question his identity, observing it as it were backlit, seen through filigree, to understand its core, in which diverse elements are interwoven and stratified. In this way the Arab identity has been able to mature, bringing to light not its more cliched, ideological or superficial components, but its deep-rooted structure. Hassoun’s paintings are like images that recreate the narrative forms of Arabic literature: stories that allude to other stories in an endless game of Chinese boxes; the figure of the wanderer (the Alexandrian of the Hamadani’s Maqamat) who disguised himself, to reveal only in the end his narrative stratagems, pretending to consort with poets who actually lived in past eras.

In Hassoun’s paintings, his phantasmagorical gallery of images taken from Western art are interlaced with the figures of modern day African women or people in constant migration, who lead us, just like the wanderer of the stories, into a multifaceted, polymorphous world. In his most recent works, icons disguised as other icons reveal hidden meaning by means of subtle irony – we have Van Gogh with Che Guevara’s beret or a modern Judith with the face of Amy Winehouse decapitating Holofernes/Cattelan. The pop aesthetic of these crossovers and fusions is really nothing more than what we can see anywhere we are in the world: fast food signs next to Renaissance monuments, LED displays that suddenly light up at the gates of dusty far-off cities in the Far East, unruly crowds milling around, perhaps at a border they are seeking to cross, or perhaps even to attend a hyped-up cultural event, fake Italian cities recreated blemish-free in the American desert or savages who are in fact celebrities transported onto a reality island. In his latest works Hassoun appears to be alluding, with a smile, however, to this continuous sense of disorientation. 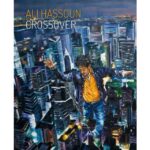