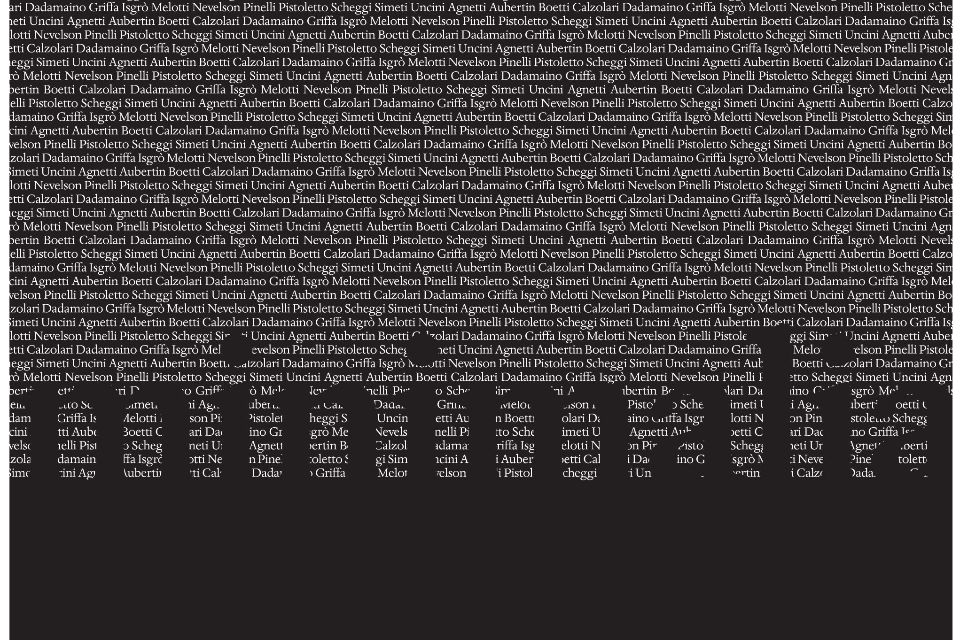 The exhibition features around 20 Volumi [Volumes] by Dadamaino, executed between 1958 and 1961. With this term, which denotes the work produced by Dadamaino  in the late 1950s and early 1960s (the first to make her known to the public, and with which she she shifts suddenly from figurative to experimentation on a framework) the artist made her intentions very clear. Which were to work on the three-dimensional quality of physical space, on extension: not cuts or holes, as in the work Fontana had been producing for at least ten years, or surface, as in Castellani, but figures, nearly always ovoid figures, hand-cut onto the canvas, with imprecise borders, which empty the canvas until the frame is revealed, transforming the picture into pure structure, in which the empty areas dominate the space.
“1. Post-Informal and Proto-Dadaist position, with critical destruction of the canvas, 1958-1959” wrote Dadamaino in notes from a synopsis in which she introduced herself.
“Of course Fontana played a crucial role in my art. If Fontana hadn’t pierced the canvas, I probably wouldn’t have dared to do it either. Taking away material, even to the point of making parts of the frame visible, in order to deprive it of any rhetoric and return it to the tabula rasa, to purity”. And the artist herself stated explicitly to whom she owed the courage to break with painting – not only away from the figurative, but also the Matter Painting [Matericismo] of Informal Art, of the imitators of American Abstract Expressionism, with its core of internal tragedy. It was a flight from materiality to immateriality, a removal, a tabula rasa, to enable her to start out on a new footing. “So I made large ovoid slashes on the clean canvases, sometimes only one, as large as the whole picture. After this act of liberation I was puzzled as to how I should proceed. The “how” I solved by turning to Futurism… The wonderful Futurist teaching (who knows why it was forgotten?) was the most vital and real that one could find. With this in mind I looked at my work. Behind the great holes I saw a wall full of light and shadows that vibrated and shifted. That was what I had to seek out and pursue. Until then art had been a static affair, apart from a few pioneers, we had to make it become dynamic again, using instruments derived from the latest technical-scientific developments, once it had been established that art can be made with any means.”
And yet, despite this duly recognized debt , Dadamaino’s volumes are something other than cuts and holes, not only in the dimensions and extension, but also in the elimination of any aspects that are perceptible with the senses, chromatic, pictorial, opting rather for an absence of colour, black or white, which becomes total removal, absence.
The exhibition continues with works from 1960, a year which marked a first turning point in her “volumes”. No longer one or two irregular shapes arranged on the canvas in an apparently random way, but a series of precise circles, probably obtained with a stencil placed on the canvas, all uniformly executed, with formal geometrical rigour, as if rejecting any randomness or reference to Informal Art.
And immediately afterwards, still in 1960, a breakthrough year, Dadamaino found a new path in her geometrical quest in a new material, plastic, and in particular, in the sheets of Rhodoid used for shower curtains, three or four of which which she laid one on top of the other, mounted on a frame of graph paper. These are her Volumi a Moduli Sfasati, [Volumes with Out-of-phase Modules], in which the holes appear to move, vibrate dynamically and animate the transparency of the sheet. It is an internal optical movement, a  mirage of illusions, a tachycardiac beating, employing a material that reveals unexpected potential: “while I did the mounting, the heat of the hand was sufficient to distort the weave slightly and create a series of overlapping, but blurred, images”.  This marked her definitive rupture with the “old world” of the painter.